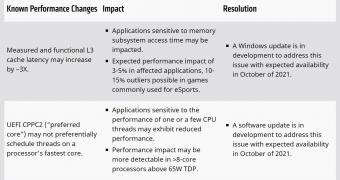 Windows 11 is now available for everybody, but if you installed the new operating system on an AMD system and noticed a substantial slowdown in performance, then it’s worth knowing the company itself is aware of the whole thing and fixes are coming.

AMD says in a tech support document that some of the computers equipped with compatible AMD processors could end up experiencing reduced performance in certain applications when running Windows 11 due to two different problems.

First of all, AMD says, the measured and functional L3 cache latency could increase by approximately three times, AMD says.

The good news is a fix is already on its way, and it should be released to users as part of a Win… (read more)
Source: Softpedia News