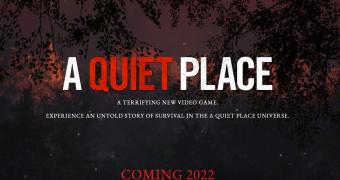 The A Quiet Place movie series has an amazing success, enough to tempt game developers into bringing it to new audiences in a slightly different form. Publisher Saber Interactive and developer iLLOGIKA, along with EP1T0ME, have just announced they have video game in the works based on the A Quiet Place movie franchise.

“The A Quiet Place video game will let fans experience the tension of the films with a level of immersion they’ve never felt before. We’re excited to work with EP1T0ME and to team up with Saber Interactive to share this unique vision of hope and horror with players everywhere in the future,” said Hervé Sliwa, Creative Director at iLLOGIKA.

The game will feature an original story and gameplay that will try to capture the suspense, emotion and drama for which the series is known. The team behind the game, iLLOGIKA, is a Montreal-based studio with veteran talent from the Rainbow Six and Far Cry franchises.

“The amazing success of the A Qui… (read more)
Source: Softpedia News